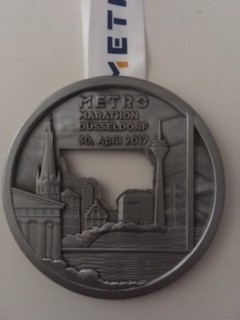 In the last 12 months one of our Credit Control team, Ian Rostron, better know as "Rosty" embarked on an epic fundraising challenge with one of his good friends Mark and Janine to raise money for Diabetes UK and the British Heart Foundation in memory of Mark's brother "Daz", who sadly passed away from a heart attack in April 2016.

The challenges kicked off last year with the Sheffield 10K and Manchester Half Marathon and more recently in April 2017 Rosty completed the following:

Rosty completed the first half of the Düsseldorf Marathon in 2 hours 6 minutes and the second half in 2 hours 30 minutes, totalling an impressive finishing time of 4 hours 36 minutes!

Red Arrow are really proud of all of Rosty's training and want to say well done for all of his commitment, hard work and training!